Adjacent Mounds | The Yard Mound | The “Tumulus” | The Long Mound

Because many of the mounds on the Wright Place are very low relief – and some seem to be located in the building envelope where they may have been damaged over the years – it is difficult to know exactly how many there are.  Further, though we know that a mound in the apple orchard has disappeared, it’s possible other mounds have been destroyed by farming as well, leaving no trace – or memory – behind.

As mentioned on the Rectangle page, there are at least two long, narrow curving mounds adjacent to the rectangle, both of which change direction at some point.  Both of these mounds are very low relief and have numerous disturbances in them which dowsing indicates may be burials.

The west end of one of the lower mound lies a short distance from the southeast corner of the rectangle (there is a depression running some distance south to another cut in the terrace that may have been used for drainage) and runs east-southeast for a distance before curving to run straight east towards the farmyard.

The south end of the upper mound lies east of the northeast corner of the rectangle and is very indistinct.  This mound runs north-northeast for a ways before angling due north.  There are two distinct depressions (marked in orange) and one slight depression (marked in white) at the north end of this mound: 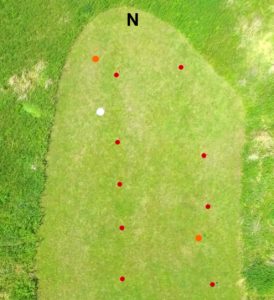 Lidar indicates  that there may be a smaller mound paralleling this mound a few yards to the west, but it’s very difficult to identify it in the grass.  Lidar indicates other disturbances in this area, and prior to reseeding this area to native plants, brome grass in this area showed remarkable variation in color, suggesting there is more to be found in this area.

There is a small circular mound located in the farmyard, east of the rectangle (this mound appears to align with the south end of the rectangle).  There is a noticeable depression on the west side of this mound which dowsing indicates is a burial (dowsing suggests there are other burials there also).  There is a small raised area just south of this that runs close to east/west but it is very hard to determine it’s edges.

In the drone photo below we’ve marked the perimeter of the circular mound in red paint and aligned the marks to magnetic north.  The depression in white.  Instead of marking the edges of the adjacent ridge we’ve marked the more evident top: 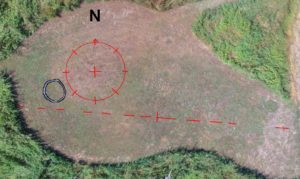 The circle is 7′ 1″ in radius and the long ridge extends into the grass on both sides of this photo.  It extends approximately 6’ on the south and 4’ on the north, but both mounds lose what little delineation they have where they connect.  It measures 9’ 10” from the apex of the semi-circular mound to a point straight to the sound on the ridge of the long mound.  The highest point on the long mound is to the east of this point (shown by a short line) and measures 18’ 5” southeast of the apex of the semi-circular mound.

I don’t recall who termed this mound a “tumulus,” but it is helpful to use this term to keep the various mounds straight.  This large mound stands about 5′ above the surrounding bottom and rises very gradually on the east, south and west sides but drops off steeply on the north.  The Wright Mound, the Gillespie Mound and one of the mounds on the Plum creek all share this characteristic of dropping off steeply on either the north or south side.

Though no depressions are visible, dowsing indicates burials in this mound.

Though we didn’t flag the waterline of this mound when the area flooded in 2019, the waterline in many places is indicated by changes in vegetation – the flood washed in a lot of weeds, so areas that were submerged are choked with weeds while the areas above the floodwaters are not.

By walking around it using GPS, William and I were able to mark the waterline of the tumulus on a lidar image –

On the Wright Mound page I discuss how the shape of its waterline closely resembles the shape of a buffalo heart, so it seems worthwhile to compare the waterline of the tumulus to other organs.

Buffalo are, like cows, ruminates and thus have a number of additional organs, but an initial comparison suggests a similarity perhaps to the omasum or possibly the liver.  That this mound was even intended to represent some portion of a buffalo – let alone which organ – is, at this point, merely speculation, but I’m discussing it here to allow the visitor to consider different possibilities.

This is a very long and narrow mound that runs very nearly straight north and south (it is oriented just slightly west of north/east of south) and does have depressions on and near it, indicating possible burials.  Lidar suggests that it once continued on to the north, possibly to the road or even just past, but this ground was plowed in the mid 1980s so trees could be planted.  The drone photo below has not been compensated for the effects of perspective, so it appears to be narrower to the north when it is actually the same width its full length.

This mound, in addition to what ever other significance it may have had, may deliberately mark the builders’ determination of true north and south.  As mentioned above, when viewed with lidar, this mound runs very nearly straight north and south.