My roots in Boone County run deep – within two years of having been opened for settlement, three branches of my family were living within a few miles of each other in southeastern Boone County.  The Hosfords relocated from adjoining Madison County in 1872, settling north of St. Edward in Voorhees Valley, while the Brooks family settled a few miles west of St. Edward. It was my relatives on the Mansfield side of my family, however, who settled on (or later purchased) the farms we now own.  A few years later a fourth side of my family, the Moreheads, also settled in this area.

Though we lived in town, my younger brother Gregg and I spent a lot of time out at the farms while growing up, and we heard the stories associated with just about everything there from our many older family members.  I began farming with my father Frank and grandfather Russ when I was 12 and continued farming until Frank’s retirement in 1992.  Since that time the crop land and some pasture has been rented to neighbors, while the land (546 acres) is now owned by my wife Lori and myself. 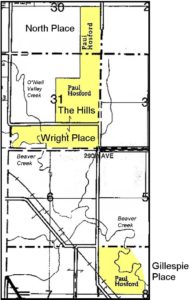 In 1827 my great-great grandfather Augustus George (A.G.) Mansfield was born in London to a family of tinsmiths. A.G. immigrated to America at age 14 and settled in northeastern Illinois, purchasing 40 acres in Boone County, ILL, in 1848.  In 1853 he married Mary A. Moore, from New York state, in Marengo, a town in adjoining McHenry County. There they had ten children, 6 boys and 4 girls, and all but one girl lived to adulthood.  My great grandfather, Frank Mansfield, was one of their sons.

The Mansfields did not move to Boone County, Nebraska, until 1880 (and subsequently did much to develop Albion, including naming the streets – Marengo Street was named after their home in Illinois and Ruby Street was named after my newly born great aunt Ruby), but two of Mary’s siblings – Orlando Moore and Amanda Bowman (married to Thomas Hazard Bowman) – arrived here with their families in October of 1871. They were part of a wagon train consisting of relatives of Thomas Hazard Bowman (remembered in our family as Hazard), all of whom settled between Albion (then Hammond) and St. Edward (then Beaver City) near what soon became the community of Boone.

Orlando’s family settled about a mile northwest of Boone.  Hazard’s cousin Sophie and her husband, William Ellis, settled about the same distance to the southwest of Boone and her brother and sister, Thomas Benjamin and Susan Bowman, settled next to them (Thomas and Susan’s homestead is still owned by the Bowman family today).  Hazard settled about a mile north of Boone on what we now call the Gillespie Place.  In 1872 a sod school serving the Boone community (early teachers included Susan Bowman and Mortimer G. Barnes who later helped design the locks for the Panama Canal) was located on the southwest corner of his claim (it was later moved a mile or so west to a frame building on Orlando’s land) and Boone County’s first Methodist Church service was held in Hazard’s home.

Another of Hazard’s cousins, Shadrack, settled to the north northwest of Boone on land we now call the Wright Place and the Hills. There he built a 14’x16′”up-and-down”  wood shanty, receiving his land patent on 320 acres in 1878.  Sometime between then and 1883 Shadrack married Romelia (Romy) Fawlsten from Wisconsin and returned to Boone County, IL.

In 1883 Shadrack and Romy sold the homestead to A.G. and Mary Mansfield.  The next year the Mansfields sold the south half of this farm (the Wright Place) to their son Frank (who had moved there in ’83).  Frank married schoolteacher Helen Morehead in 1886 and they lived in the small frame house Shadrack had built (eventually expanding it to four rooms).  Here they had three daughters, Ada (1887), Ruby (1889) and Nellie (1892).  The family built a larger house in 1899 where their fourth daughter, Etta (my grandmother), was born in 1900.

After moving to Albion in 1913, my great-grandparents rented the farms (probably to their future sons-in-law – their older three daughters’ marriages were all arranged for land succession reasons).  In 1916 Nellie married Howard Gillespie and they took up residence in the large farmhouse, while her sister Ruby and her husband Monte Wright (they married in 1917 and are the reason we now call this farm the Wright Place) lived in Shadrack’s original house.

Soon after Monte and Ruby married, Nellie and Howard moved about a mile down the Beaver to Hazard’s homestead.  Hazard had sold this farm in the 1880s to Alonso Yates, who in 1902 sold it to Howard’s father, Robert Gillespie (hence the name “Gillespie Place”).  Howard and Nellie remained on this farm until Howard’s death in 1975. My father Frank and grandfather Russ had been farming this ground since Howard’s health declined in the 1950s (I joined them in the 70s), and we continued to farm it until 1992.  The Nygren family rented the farmhouse until the mid-1980s and it has stood empty since.

When Nellie and Howard moved to his father’s farm, Ruby and Monte moved to the large farmhouse, remaining there until retiring to Albion in 1963 (I can remember frequently visiting them before they moved to Albion).  Because they had no heirs (their adopted son Eddie had died in the early 1940s), Monte and Ruby were given a life interest in the farm when Frank Mansfield passed away in 1948, but the farm was actually left to my father.  After leaving, Monte and Ruby rented the farmhouse first to the Grape family and then to the Shaw family who lived there until Lori and I were married in 1985.  Our attempts to remodel the farmhouse failed and it has stood empty since.

Monte and Ruby rented the crop land and pasture to three adjoining farmers, the Olsons, the Lisses and the Sedas.  My father and I also farmed portions of it but in time all this farm ground was rented to the Olsons since they could irrigate a large portion of it from their well.  This land eventually passed to my brother, my wife and me, and Lori and I now own it.

The Hills and the North Place

There was never a house on the Hills, but there was at the North Place, which was homesteaded by Walter Slade in the early 1890s and purchased by Frank Mansfield in the early 1900s.  This farm was rented to the Sparks family until my father and grandfather began farming this land in 1949.  My father spent time living both there and in town until marrying my mother Mari Mansfield (her grandfather was Frank Mansfield’s brother Fred) in 1959 – my family lived near my grandparents in Albion from then on.  The farmhouse was extensively vandalized in the 1960s and little of it remains today.