In order to calculate mound locations, azimuths and alignments, I have long sought to accurately map the mounds on our property.

My first attempt was in the late 1990s when the local school high purchased a very expensive and very precise GPS unit.  I arranged to use it to map a few sites on the Wright Place and in May of 2000 a by then experienced student, Kyle Wyatt, brought the GPS unit out.

Though our initial attempt yielded meaningless results, on our next attempt Kyle and I mapped the Wright Mound,  the Rectangle,  and the Yard Mound as well as three lodge depressions.  Kyle then created a map.  Unfortunately, this map was in units called “northings” and “eastings” and at that time I could not find a way to convert these units into longitude and latitude.  So while I could see the mounds in relationship to each other, I couldn’t calculate their positions in a way that was meaningful to me. 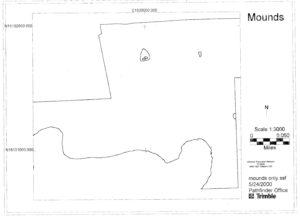 Because the signal was blocked by a tree, only part of the rectangle’s shape registered correctly.

Many years later I had my sons William and Thomas stand on the apparent centers of these mounds and recorded the GPS latitude and longitude with their cell phones.  This was a big step forward, but because cell phones are not terribly accurate, I still wanted more precise location data.

Now, with Blake Trombley’s help, it is possible to locate the exact positions of mounds using lidar images that provides elevation, latitude and longitude wherever the cursor is placed.  This has provided the most accurate data yet, but because it can be hard to precisely determine the center of a mound – one still has to visually estimate their centers/perimeters on the lidar image – I returned to Kyle’s GPS maps, which featured a distance scale, to determine the distance between the center of the Wright Mound and the Rectangle on the Wright Place.

After scanning Kyle’s maps my son William used Photoshop to enclose the widest points of the Wright Mound and the Rectangle, producing a box around each.  By then drawing diagonals, we were able to more accurately estimate their centers. 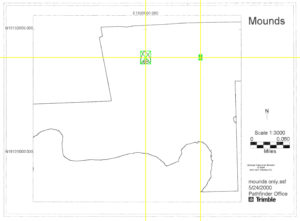 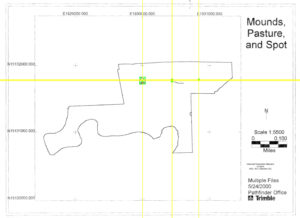