Though a few stone artifacts and some charcoal has been found at the North Place, most artifacts on our property have been found in the pasture and the fields bordering it on the Wright Place which was once littered with artifacts. Most, however, had been found – and then lost – by the people who combed over it long before I was born.  As a result, my collection is small, but in addition to many pot sherds and stone flakings, these and the photos below show the larger artifacts I’ve found.

A major landscape feature in this area is a now-drained lake just across the Beaver Creek south and west of the Wright Place.  According to both neighbors and local pot hunters, evidence of Native American occupation has been found all around the drained lake site.  People have reported finding numerous stone scrapers, points and flakings, as well as pottery fragments around the shores of the lake.  The current owner told me that many artifacts have been found near a high bank on the west side of this area where the Beaver once flowed (he believes there was a village there).  He said that there also used to be a bank about eight feet high on the southern shore of this lake and many artifacts could be found there.  He said that due to extensive bulldozing to make this area farmable, these artifacts now lie “under about five feet of dirt.”

One individual had considerable success locating arrowheads made from hammered-out .45-70 shell casings with a metal detector near the western shore of this lake, showing that Native Americans were still hunting there after the advent of the Springfield “Trapdoor” rifle in 1873, which fired these shells.  This was a military rifle – that Native Americans were using spent cartridges to make arrowheads indicates they lived part of the time near soldiers.

According to older family members and neighbors a considerable number of artifacts, including stone and bone tools, stone flakes, pottery fragments, evidence of fires and even a Peace Medal have been found in the east pasture of the Wright Place and adjoining fields (a few artifacts have also been found in the western portion of the pasture).  Unfortunately, almost all have since been lost, including an exquisite stone knife found in a fireplace and several coffee cans full of artifacts that were stolen from a neighbor in the 1970s.

In 1995 an especially deep plowing of a field east of the pasture revealed clusters of artifacts, suggesting a number of earth lodges once stood there. A local resident with considerable knowledge of both archaeology and geology, Wayne Mollhoff, collected and catalogued a number of these artifacts, drawing many of them and sharing them with the Nebraska State Historical Society.

Very little stone can be found in Boone County; what can be found here is primarily gravel pushed into ancient stream beds by glaciers and not suitable for tool making.  Mr. Mollhoff believed the variety of stone types found at our site was greater than that utilized by the historic Pawnee (who mostly used chert), and in many cases came from quarries farther away that the sources of the Pawnee’s stones.  He felt therefore that our site probably predated the historic Pawnee.

At this same time Mr. Mollhoff was also connected with the excavation of another village site a dozen miles or so to the north of our property. Named the Beaver Creek Site and carbon dated to around 1,100 A.D., a comprehensive report of this site was published by the Nebraska State Historical Society in 2002.  Mr. Mollhoff shared items from our site with the State Historical Society, including charcoal samples which could be carbon dated. He told me later that the Historical Society had declined to date the charcoal samples, concluding that the artifacts were so similar that the two sites most likely existed at the same time. This would indicated that our village site is also approximately 900 years old.

Not all artifacts date to approximately 1,100 AD, showing that the area was occupied over a span of centuries.  The corncob, the size of a modern “nubin”, and the rusted metal artifacts below it were found in a preliminary excavation of a lodge site.  Stone and pottery fragments were found also, indicating that the people who lived there used both stone and metal.  This would suggest the lodge site dates to the protohistoric period since once European trade goods became readily available, Natives in this area abandoned working with stone and pottery.

Erosion of a bank above the Beaver Creek revealed an apparent Native American trash pit containing the skull and bones of a hog.  Hogs were brought here by early settlers, so this must have been from a late Native American occupation.  Also present were small fish bones, a few pottery fragments and a few tiny kernels of yellow corn, but these were below the hog bones.

Artifacts from the Boone County Museum

The Native Americans who lived in our pasture did not exist in a vacuum, nor did they confine their activities to our land.  I’m including photos of Native American artifacts from other local collections, including that of the Boone County Museum in hopes of shedding more light on the People of the Tall Grass and Thunder. 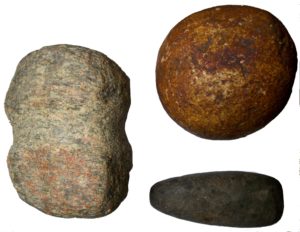 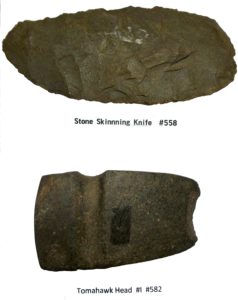 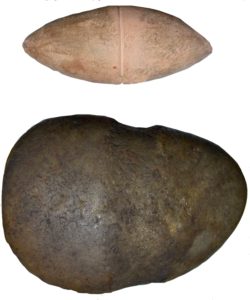 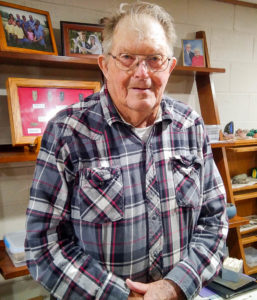 Ron Cruise of St. Edward grew up on a farm along the Bogus Creek in southern Boone County.  As a child Ron read about archaeology and decided to look for artifacts on his family’s farm.  He immediately did, and has been an avid amateur archaeologist ever since.  Ron has worked with professional archaeologists and read extensively on the subject of Native Americans.  Below are artifacts from his collection, beginning with items and text from a large wall display in his basement that features artifacts he’s found and information about the time period they date from.

Hunter-horticulturalists.  Lived in earth lodges.  Bow and arrow in general use.  Period ended by drought. 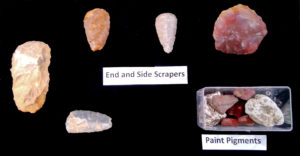 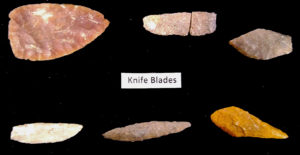 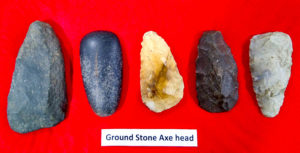 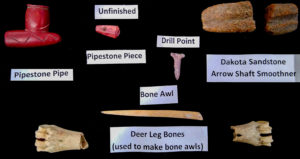 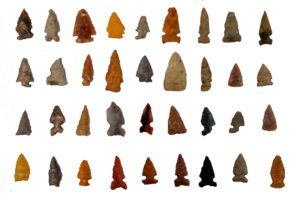 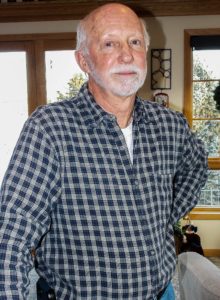 Mark is a semi-retired science teacher in Newman Grove.  Mark grew up near Loretto and found so many large tools on his family’s land near the Beaver Creek northeast of Loretto that he believes they must have been “cached” or stored there for later use or trade. 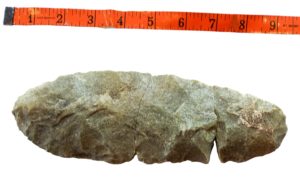 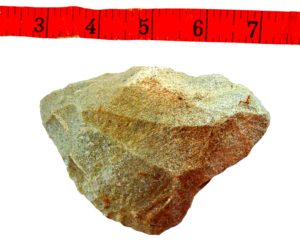 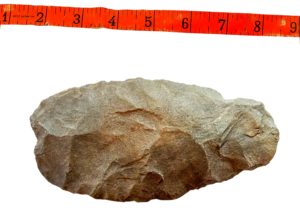 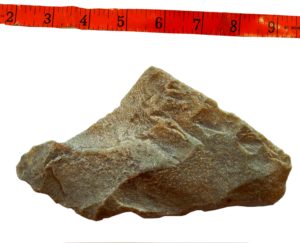 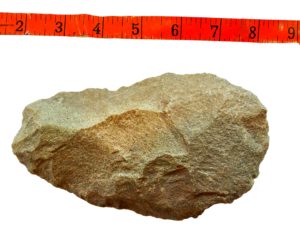 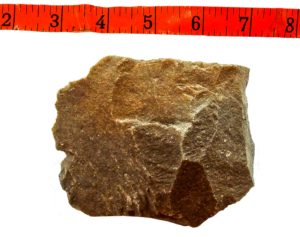 In 2010 Mark sent photos of these artifacts to two experts, Terry Baxter of Western Artifacts and Gayle Carlson from the Nebraska State Historical Society, asking for their evaluation.  Here are their replies:

These look like very crude knife blades or chopping tools, most likely from the Archaic period, around 3,500 years old.  –  Terry Baxter, WesternArtifacts.com

They are all fairly large bifaces (worked on both surfaces) of what appears to me to be what archaeologist call  Bijou Hills quartzite, from a well-known source area in southern South Dakota.  This type of stone is also found in northeastern Nebraska (Boyd County and a few other surrounding areas).  I don’t believe it is possible to determine the approximate age of these artifacts because bifaces of this general type were made for thousands of years.  It would be necessary to have more diagnostic artifacts, such as projectile points or pottery, which changed in the way they were made through time, to get a better idea of age.  However, this type of quartzite, because of its rather coarse nature which made it difficult to flake into small, delicately flaked tools, was used mostly for larger tools such as the ones in your photos.  They would have been used mostly for various cutting and chopping tasks that required a fairly large tool.  For some reason, tools of this type are more common on fairly late Native American sites in Nebraska, such as protohistoric and historic Pawnee villages.  This may be either because the Native inhabitants, with easy access to Euroamerican trade goods, were losing the ability to do the type of flaking necessary to make smaller, better-made chipped-stone tools, or because metal trade items had already replaced most of their tool types.  For whatever reason, since tools of this type are more common on later sites, I would suggest a somewhat more recent age for the manufacture of the tools in the photos than 3,500 years (possibly 500 years or less).  –  Gayle Carlson, Archaeology Division, Nebraska State Historical Society