When my grandmother Etta, who grew up on the Wright Place with her three older sisters, was a little girl the family had a large orchard.  In this orchard was a mound that my grandmother and her sisters were forbidden by their mother, Helen Mansfield, from playing anywhere near.  Her mother believed that it was a Native American burial mound and that the people in it might have died from some terrible disease.  She was afraid the germs were still in the soil.  She made such a big deal out of it that my grandmother never forgot.

In time the trees were removed and the area was plowed and farmed over.  During this time the mound was destroyed.  When I asked my grandmother where the orchard had been, she just said “south” of the buildings.  But that includes a lot of ground.

So in 2017 I decided to conduct an experiment – I decided to try to locate the lost orchard mound through dowsing.  I’m fully aware that this is an unproven technique subject to interpretation (and misinterpretation), but I have used it in other areas and personally believe it often yields valid results.

The first thing I needed to do was learn more about the orchard.  My grandmother said it contained 500 trees and had strawberries planted between the trees. A search of the Albion Weekly News online archives confirmed this – a 1902 article about Etta’s father Frank Mansfield talks about his 500 apple trees, which he called his “bicycle orchard” because he’d “traded a mighty good bicycle and paid a little cash to Roberts for these trees.” Some of the trees were beginning to bear fruit – depending on what type of trees they were, that means he had planted them somewhere between 1892 and 1900.  The article states that in addition to the apple trees, he also had “about 300 cherry, plum, peach and pear trees…”  Apple orchards typically lasted 20 to 30 years, suggesting it was probably torn out – and the mound with it – in the 1920s.

To narrow down the search area I talked the oldest farm neighbor, Ray Olson, and asked if he knew where the orchard was.   He said that long ago an attempt was made to break up the southeast corner of the pasture.  He said they had to just give up because there were so many roots from fruit trees still in the soil that it damage the ripper.  So that area seemed like a good place to look for the mound.

I knew this area of the pasture had once been farmed — the family remembered it and I have an aerial photo from 1938 where you can see plowing in this area (they must have plowed at a shallower depth and thereby avoided the problem with the roots).  So I focused my search on the area that was once cultivated (you can still find evidence from the old-time plowing, especially the dead furrow in the center).

My son William and I first tried to dowse the area in the winter, but it was too cold and windy.  We went back in the spring and discovered what I interpreted to be a concentration of individual burials near the north end of the old plowing (since this is where the family presumably entered the orchard, that might be why it was such a concern to my grandmother’s mother…).

That summer we mowed the vegetation and used spray paint to mark what my dowsing rods indicated were both the graves and the perimeter of the mound (there were a few graves outside the perimeter which is very close to being a circle). We purchased a Yuneec Breeze 4K drone and opened a new chapter in our efforts to better understand those who were here before us: 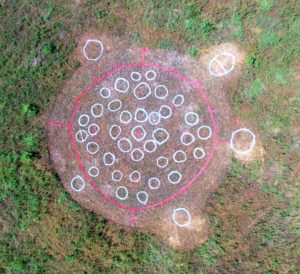 We marked the perimeter circle every 22.5 degrees for reference in the photo (the arrow is magnetic north).  We also put small marks at 10 feet from the center for additional reference (I’m more comfortable with English rather than metric units).  This possible mound measures 31. 583′ north/south and 31.917 east/west.  We then measured the radius at each of the reference points – the radius averages 15.48′.

I use two dowsing techniques to locate what I believe to be graves — one checks for disturbances and the other for actual bodies.  Circles with a line completely through them indicate a disturbance but not a burial (perhaps grave goods?).

There appear to be 37 disturbances (one without a body) inside the perimeter and 5 (again one without a body) just outside it for what I think is a total of 40 burials.  The possible burials are mostly small, indicating they may be children and/or the defleshed bones of adults.

They are also arrange in a crude pattern.

There is a center grave (marked with an “x” that aligns to the magnetic cardinal directions).

Moving outward along the semi-cardinal axes reveals 3 graves in each of these four directions:

There are also eight graves placed in the gaps between the above sequences of graves:

Since this was found using two methods of dowsing, it all remains conjectural.  Hopefully, a non-invasive technique like Ground Penetrating Radar can be used here someday to determine if this is in fact the location of the long-lost Orchard Mound.

It is worth noting that the average diameter of this hypothetical mound is 31.75′, very near my proposed 31.5′ = 20 Native Cubits.

IF this information should someday be validated, it would appear that this mound may have been a unique form of ossuary where instead of putting the bones of many people together in one pit, the bones were kept separate and arranged in a very definite pattern.  And whether or not this information is accurate, there WAS a mound somewhere in this vicinity, an area where numerous artifacts have been found.  This is the only location I’m currently aware of where a mound is so close to a village – on the Wright Place, for example, the absence of artifacts in the mound areas was noticed long ago – my grandfather Russ Hosford told me that these areas must have been important because the Indians had been careful not to ‘litter’ there.

Given the arrangement of the burials and their nearness to the village (if the village was there at the same time as the mound), then perhaps the bones buried there were of special significance to the villagers.  But until this location and arrangement of burials can be confirmed, everything except the fact that there was a mound in this area has to remain speculation.

One other thing of interest – the same friend who named the Native Americans who once lived here “The People of the Tall Grass and Thunder” named two hilltops to the north as “The Hill of Chiefs” and another to the east of that “The Hill of Mothers”.  This dowsing-indicated location for the Orchard Mound would place it at a 45 degree angle southwest from the Hill of Mothers, and angle I rather doubt would have been coincidental…