Boone County is located in northeastern Nebraska and land use is overwhelmingly agricultural.  The Beaver Creek flows for 40 miles northwest to southeast through the county, the Cedar River crosses the southwest portion of the county, and several smaller streams are also present.  40% of the land in Boone County is valleys and bottom land; the rest is rolling loess hills and table land.  A variety of prairie plants and grasses grew here before settlement. While many of the larger animals once native to this area, including buffalo, elk, antelope, numerous wolves and rattlesnakes are gone, a number of smaller mammals, birds and other species still remain today.

Just as the animal life in Boone County has changed since settlement, the physical landscape has changed as well.

In his memoir, My Life and Times, Russell Hughes, whose family lived immediately west of the Wright Place in the 1920s and 30s, speaks of fishing in both the O’Neill Creek and the old river bed and the ponds left from draining “Lone Tree Pond” just across the Beaver from his home.  He says that the O’Neill was a “warm, flowing stream” at this time and a good place to catch carp, sunfish, catfish and crappie (I caught my first fish there when I was six).  Occasionally, when the water table is high, springs on the Wright Place will flow into the O’Neill.

In many instances springs feeding these creeks were dynamited to allow the surrounding land to be farmed.  A friend to the north farms a lowland near the head of the Shell Creek (containing the remains of a mound with small bits of charcoal scattered across its surface). He estimates as many as 8 springs once existed, all of which were destroyed in the 1920’s and ‘30’s.

In 2000 Jerome Lucas, an archaeologist working with Nebraska’s Natural Resource Conservation Service, visited our site.  In discussing the O’Neill with Mr. Lucas, he said archaeologists find sites miles up what are now dry creeks, indicating they were flowing at the time of Native habitation.  So though most artifacts in Boone County have been found near flowing streams, there may be sites along now dry streams that have yet to be discovered and investigated.

In addition to the lower water table, wind and rain have reshaped the landscape in this area.  Low areas have filled with sediment and the Beaver creek has changed course, altering the landscape from how it looked in Native times and possibly burying Native sites.  Though much slower, the wind has deposited large amounts of loess over the centuries, also burying potential evidence of ancient occupation.

The land next to both the Beaver and the dry creek has changed dramatically in the years since European settlement.  Naturalist and amateur archaeologist Wayne Mollhoff, in an unpublished paper devoted to the surface geography and geology of an area approximately 12 miles upstream on the Beaver from our farm, describes the changes of the area floodplains:

“At the present time the flood plain beside the Beaver is rapidly (in geologic terms) being filled with sediment.  Old timers in the area tell of sitting on the creek bank as children and dangling their feet in the water, back in the early years of the 20th century.  Now, in most places, the water level is 5 – 10 feet below the top of the bank.  Evidence that this change is caused by the banks ‘rising’ (being built up), rather than by downcutting of the streambed, is demonstrated in many places by buried fences along the creek.  At several sites around Albion, my notes record fenceposts that were 30 to 40 inches tall in the mid-1970’s, but completely covered by sediments by the early 1990’s.  This valley filling, alternating with downcutting and scouring out of the valley fill, is the current part of a cycle that has been recurring throughout the Pleistocene, the ‘Ice Ages’ of the past 1.5 million years.  The valley is filling with sediments that are washing down from the hills that form the northeast margin of the valley.  This is largely due to greatly increased erosion in the past century as the stable protective cover of prairie sod was removed as farming by European settlers began.  It is filling layer by layer as the sediments are washed down to collect of the valley floor.  It is filling because it is washing down faster than the creek can carry it away.  A side trip 8 miles upstream will show what the creek banks here probably looked like in pre-European settlement days.”

In the spring of 2019, when heavy flooding occurred throughout Nebraska, the O’Neill deposited a great deal of sediment in our pasture, burying fenceposts in the way Mr. Mollhoff describes in a matter of hours.

Sedimentation has thus altered bottom lands a great deal since Native times, making it difficult, for example, to determine the original bases of the two larger mounds – one on the Wright Place and one on the Gillespie Place – that are located in these bottoms (other mounds on the Wright Place were built on a terrace just above the floodplain – the threat to them has been from cultivation rather than flooding).

I’ve been told that the Beaver Creek meanders more than any other stream in Nebraska.  I’ve seen it change dramatically in places during my lifetime, and its hard to know where it was at various points in Native times.

Through the years many streams in this area, including the Beaver Creek and the O’Neill Valley Creek, have been straightened, possibly destroying Native American sites along their banks.

Sedimentation in the form of wind-blown soil (loess) may also obscure Native sites throughout this area.  The photo below is of a high bank along a curve in the Beaver on the Wright Place.  Mr. Mollhoff explained to me that the lighter color is loess that blew in and deposited over extremely long periods of time.  The lower loess collected during the Ice Ages.  The dark soil above that formed after the Ice Age ended around 17,000 years ago. The climate then changed dramatically from about 12,800 years ago to 11,600 years, returning to Ice Age conditions (some believe due to a comet or meteor impact). Following that was another temperate period.  This created more topsoil that would have supported a good deal of vegetation.  However, the climate changed around 7,900 years ago, becoming much warmer and drier.  During this prolonged period (approximately 2,900 years), loess again accumulated, and some Native American sites from this time period have been found under as much as 15 feet of this soil. As a result, few sites from this era have been found. 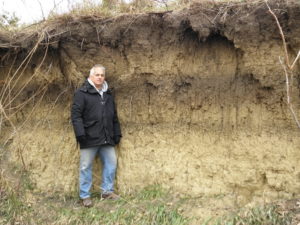 The dark soil at the top of this bank is the topsoil that has formed over the past few thousand years when the climate became wetter again.  Not visible is any sign of the Dust Bowl years in the 1930s or a much longer drought that significantly depopulated much of Nebraska starting in the 1200s and lasting around 400 hundred years.

The soil types in this bottle were collected by Mr. Mollhoff in a deep gully at the North Place.  It shows the soil layers revealed there.

Though generally lying far below the surface, the Loveland Formation soil on the right side of the above image does sometimes appear on the surface, often due to erosion on slopes.  There are several sites in the area where this soil is found and at one time bricks were made from it in both Boone and St. Edward.  Some in the neighborhood believe this clay soil was also used by Native Americans to make their pottery.  One such site is located on the west end of the lake west of the Wright Place, and at least one is near the Gillespie Place.