My great-grandfather Frank Mansfield was legendary for his ability to tell time by the position of the Sun – supposedly he was never off by more than by 20 minutes.  If you understand its motion, the sun can tell you a lot, from time of day to degree of latitude to even the circumference of the earth, all based on its position in the sky.  An instrument that helps determine the sun’s position is called a “gnomon,” a vertical object that’s used to cast the shadow of the sun on the ground: 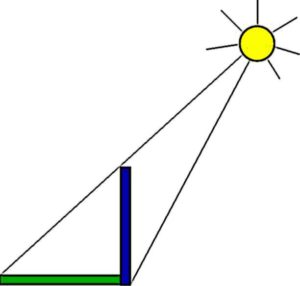 The center of a sundial is a gnomon, and in addition to indicating the time of day by the angle of its shadow, a gnomon can also be used to determine straight east and west.

Needing a visual directional reference in our drone photos, I used a time-honored gnomonic technique to create two 20’ east/west lines on the Wright Place – one on the large mound and one south of the rectangular mound.

To do so I used a three-legged microphone stand as my gnomon.  First I drove a tent peg with a length of twine looped around it into the ground and set the mic stand directly above it.  I then used a carpenter’s level to make sure the stand was perfectly vertical.  When I extended the mic stand to its full height (to cast the longest shadow possible), make-shift gnomon produced a very good shadow.

Once everything was in place I marked the end of the mic stand’s shadow on the ground, northwest of the base:

After placing a flag at this point, I  tied a second tent peg to the other end of the twine, making sure the tip of this second peg just met the base of this flag.  I then marked a semicircle from the flag with a diameter equal to the length of the shadow, marking it on the ground north of the mic stand and moving it to the east side of the stand:

Then it was just to wait for the shadow to move east (as the sun moved west) until it again touched the semicircle, marking the point where the shadow was again equal in length to what it had been when I started (shadows, of course, grow shorter then longer over the course of the day):

Even though I knew what was going to happen, I felt a little excited 5 hours later as the mic stand’s shadow crept closer to the semicircle marked on the ground: 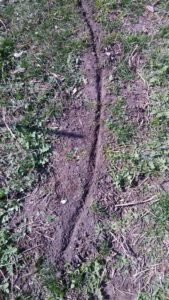 Once the shadow reached the center of this semicircular mark, I inserted a second flag.  This method of marking when the sun’s shadow is the same distance both in the morning and the afternoon produces two points exactly east and west from one another: 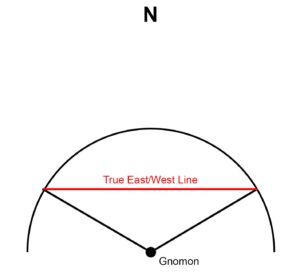 I next used a tape measure to place a third flag at the center of this line.  I then extended twine across this area, making sure it only just touched the base of each flag.  Once I had the twine staked in place, I measured 10′ in both directions from the center flag, and flagged these two points.  I then carefully spray painted a red line 20′ in length along the twine.  This produced an easily photographed line to provide both distance and directional references in our aerial photos.

Having a line of known distance in our photos enabled me to estimate other distances within the pictures, and having an east/west line in our photos allowed William to use Photoshop to orient them to the cardinal directions so we could accurately estimate angles and azimuths.  This also made it possible to add a north/south reference line with Photoshop, and I stopped work here.  Traditionally, however, a further ground-marking technique would have been used to produce a north and south line through the center of the east/west line.

To do so two circles would have been marked in the ground, each with a radius equal to the length of the east/west line and drawn from its endpoints: 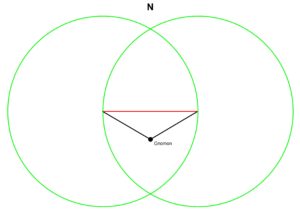 By then connecting the points where the two circles intersect, a true north/south line is formed: 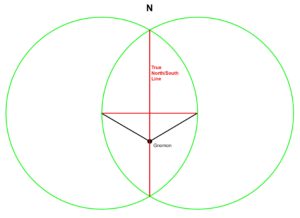 This technique of using the sun and simple geometric operations has been in use in many parts of the world for a very long time and has a number of symbolic associations.  The shape produced by the overlapping circles was known in Europe as a vessica piscis, Latin for “vessel of the fish,” and, when turned sideways and embellished slightly, served as an early symbol of the Christian faith – the symbol of the fish.  The vessica piscis was used extensively in both art and architecture, both during and before the Christian Era, and was often associated with the womb of the Great Mother or later, the Virgin Mary.

Several fundamental geometric figures are associated with the vessica.  If, for example, a vessica is enclosed by parallel and perpendicular lines, it produces a rectangle whose ratio of  length to width is the square root of 3 (1.732…):